There is something about hanging around in an old building, even more so if the building was originally owned by the proprietor’s Great Grandfather. It is not a common story in New Zealand, we don’t seem to have many commercial buildings owned by generations. This particular building is interesting, well for us foodies, as it now houses Giles Chocolatier. 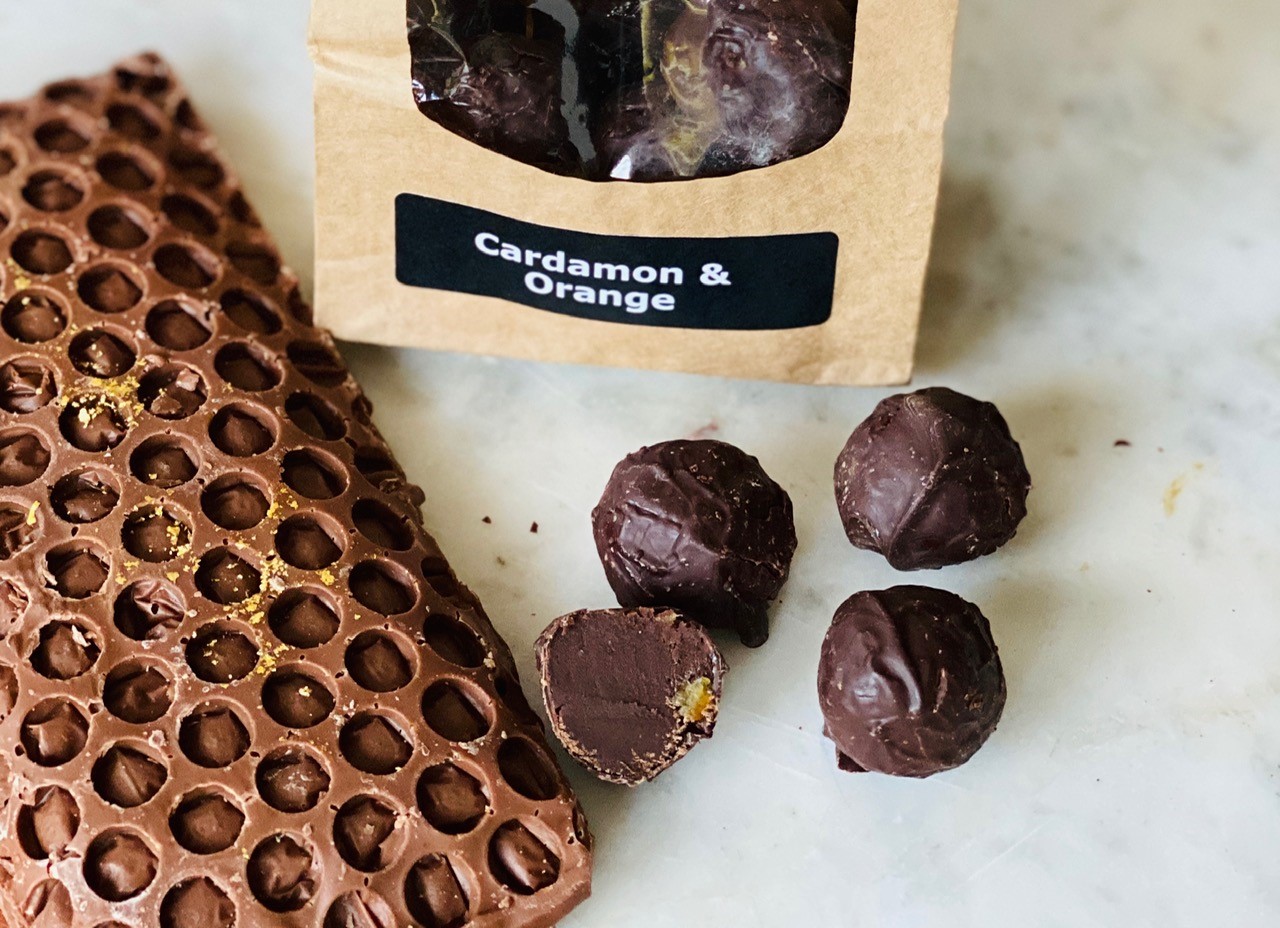 As we walk into the small shopfront building located on St Aubyn Street, New Plymouth, we’re met with a rather loud “Hello.” The gentleman who greeted us from behind the counter goes back to his conversation with his current customer. Given it is going to be a few minutes, I amble on over to look at the extensive range of truffles with exotic names like Blue Vein Cheese, Chilli and Cashew, and Black Doris Plum. Really, Blue Vein? Is that a thing? And the slabs, oh no, hang on, they’re called “Tablettes”, they too have equally exotic names like Black Salt and Pepper, and Coconut Cinnamon. To make a choice is rather difficult and, in mid thought as to which one or two I deserve, please note the deserve part, I’m interrupted by Gavin. Gavin Giles, chocolatier, and owner of the boutique retail business.

I take a seat on the small window seat, where to start? Well perhaps the beginning. Gavin is born and raised in New Plymouth, after completing training with the RNZAF and Intercontinental Hotel he ventured to London and Europe. There, he continued his pastry training under mentorship of those who date back to Auguste Escoffier, and Gavin completed his training at Guilds of London and Westminster College. (For reference, Escoffier was one of the most renowned French Chefs who worked alongside hoteliers including César Ritz – think Hotel Ritz, Paris, and Ritz and Carlton Hotels, London.) With all his formal training and lists of well-regarded establishments Gavin is almost paradoxical with his firecracker humour, full of energy and bouncing happy spirit, a true down to earth Kiwi.

Gavin reflects on how he came back, he states that, “…I broke parole and was dragged back home.” It is all in good humour as he is passionate about Taranaki. He previously had a pastry shop in New Plymouth, the first continental shop, where he produced croissants, pan au chocolat, and the other well-known delicacies. The opportunity presented itself for Gavin to move to his current premises which hold significant sentimental value. The property was originally bought by Gavin’s Great Grandfather, over the years it has been many things including a butcher shop in the 1930s. Today the walls are lined with delicious chocolate and a menu presents an extensive offering of ten different types of hot chocolate alongside one of the best coffee’s in town.

A customer opens the door and enquires whether the shop is open, the response is quick, “Is the door open? Of course we’re open, what do you want?” Gavin’s wicked smile flashes and he laughs, the customer enters quite happy and chatty, pleased they have received their regular “abuse”. Once they have been served and have left, Gavin shakes his head explaining he can’t understand why people keep coming back. It is obvious, the happy atmosphere, quick service and, more importantly, the quality of the artisan products would make anyone come back. 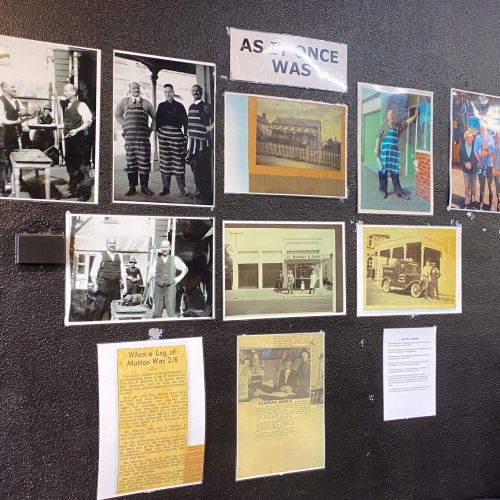 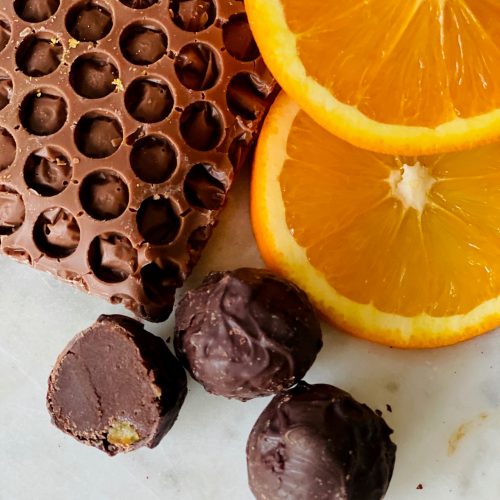 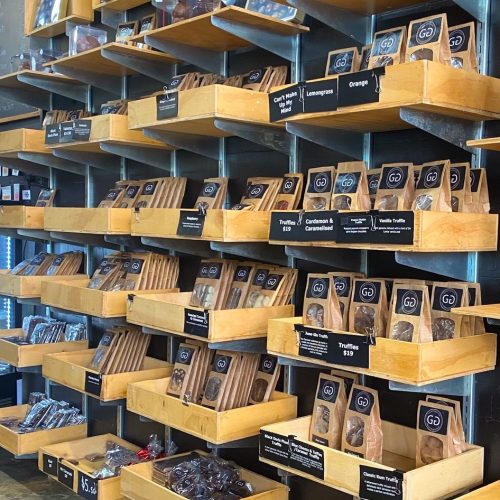 From L to R: The wall detailing the history of the building, Egmont Honey Tablette with Cardamom & Orange Truffles, Yards of Choice.

In terms of chocolate, Gavin uses Belgium Chocolate however he has also added a few “bean to bar” options which use organic coconut sugar. On the shelf there are two collaborations with local artisans, a tablette using Egmont Honey, and truffles using Juno Gin. Moulded chocolates reflect the Taranaki skyline and Kiwi Birds are a perfect alternative to traditional Bunny Eggs – nothing in this shop is ordinary.

I pick up a small book on the low table titled, 3am Thoughts. Gavin smiles broadly as he explains the book was given to him by a dear friend for chocolatier to jot down his random thoughts that seem to present themselves in the early hours of the morning. The book has become a quasi guest book, recommendations, thoughts, philosophy, ideas, and a few good-humoured insults from visitors to the store. It is by no means PC, but that’s what is so delightful about this busines, it is unashamedly authentic, it embraces and reflects the owner.

As Gavin notes that all his products are made with love and his business strategy is one that unfolds before him. He trusts that the opportunities present themselves when the time is right. One ambition is to export his chocolate to Belgium as he believes his products rival those in Europe – well the Europeans certainly don’t have Egmont Honey or Juno Gin. Delightfully he says his billboard message, if he could say anything he wanted to, would be “We make flipping good chocolate.” Now who can argue with that?

If you would like to order your chocolate online go to: Giles Chocolatier