Beer is a Perfume!

It was a cold and wet winter morning when we walked into Mike’s Brewery Bistro in New Plymouth. The first thing I noticed was the warm and inviting environment, and then the friendly demeanor of the staff at the counter as we were asked how they could assist. 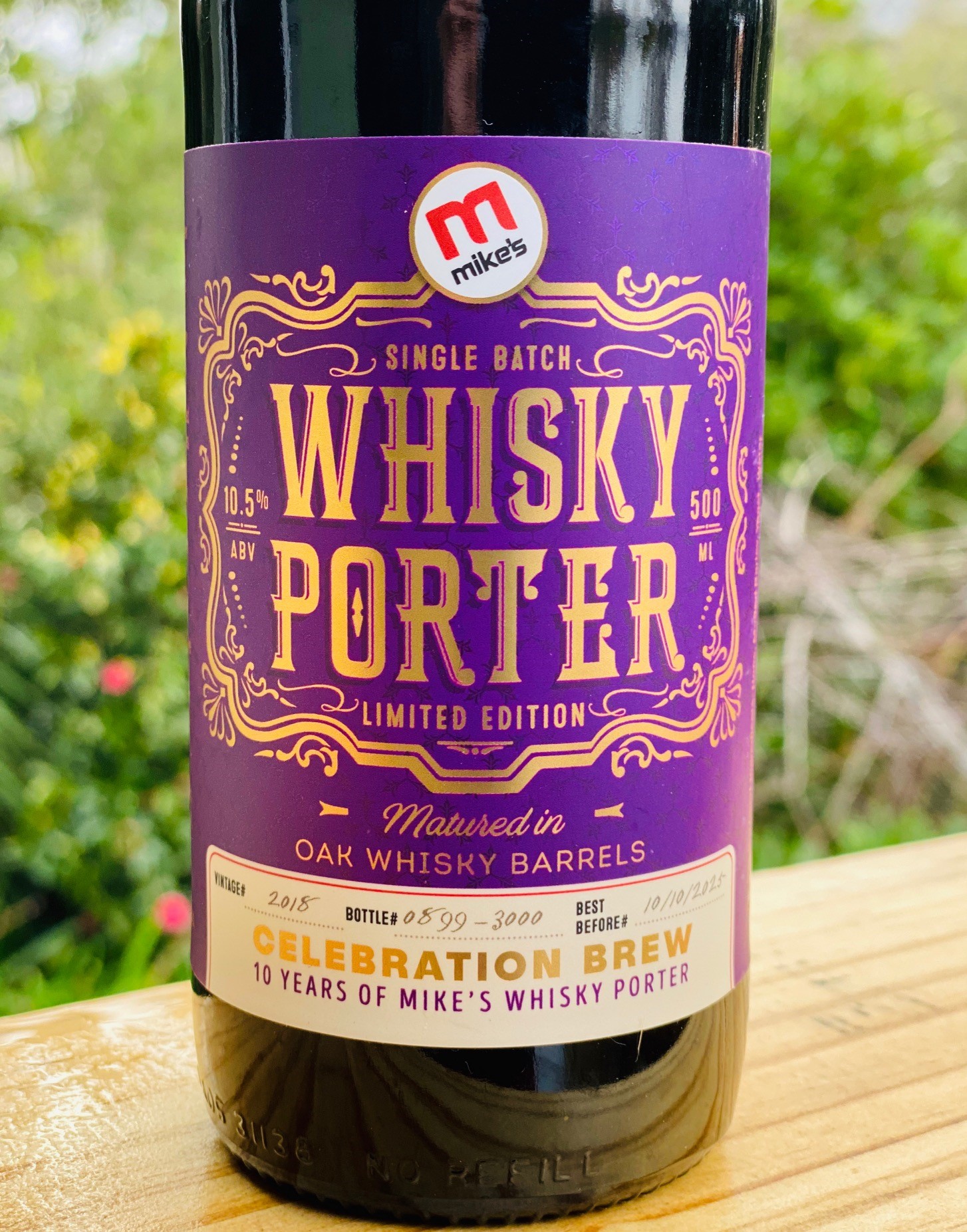 We were there to have a catch up with the owner. “Hi, we have a meeting with Mike, ooo no sorry, Ron.” I say. The lovely lady laughs as she leaves to find Ron. “Argh, get it in your head, Ron Trigg owns the business!”, I silently remind myself whilst wondering how many times Ron has been called by the wrong name over the last decade.

We’re greeted a few minutes later by a jovial man holding a bowl, he stands back, not offering his hand as he has a head cold. Sitting down at one of the bistro tables, Ron proceeds to eat his breakfast whilst we have a chat about his business.

Please take this as a warning, chatting to Ron is like catching up with an old mate from years ago. You are instantly put at ease and the conversation flows, hopping around from one topic to another and back again. There is no way to do a quick stop here, the entire environment is one of catching up, having good times, and sharing stories.

We start off talking about the infamous “Mike’s Brewery” that was once located in Urenui, this is one and the same. Renowned for brewing craft beer since 1989 and being the oldest true craft brewery in New Zealand, Ron and his family bought the business some twelve to thirteen years ago. Having hosted many beer-related and other get togethers for the community in Taranaki, Ron notes that the crowd was getting younger, refuting any idea that it may have been him actually getting older. It was time to change things up.

The family relocated the business, added a bistro, and opened their doors in the heart of New Plymouth. Ron sweeps his arm across half of the building, which is now the bistro, explaining that they decorated it themselves with much of the furniture, and lighting made with help from his dad. On the opposite side, there are bar leaners alongside the fully operational brewery. The bar, at the end of the brewery, boasts 28 taps, usually with 15 to 20 dispensing craft beers made on the premises, at any one time. 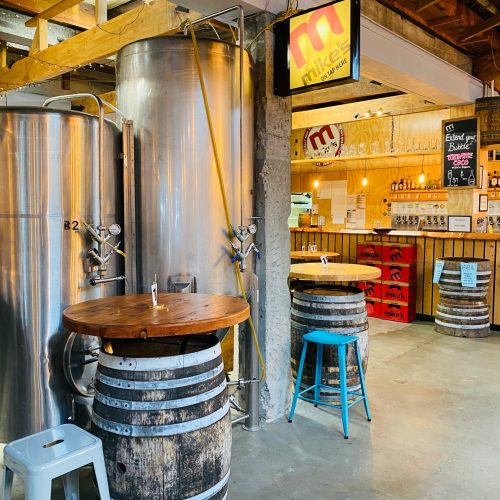 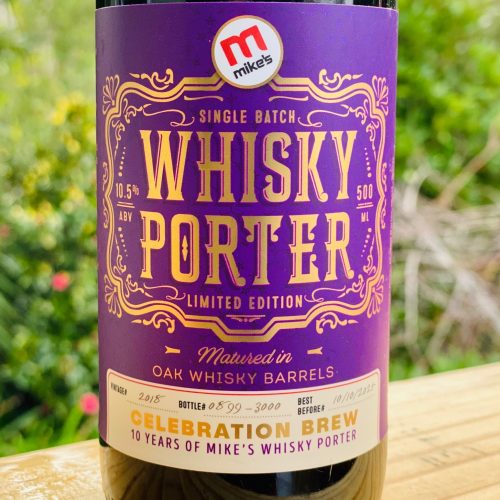 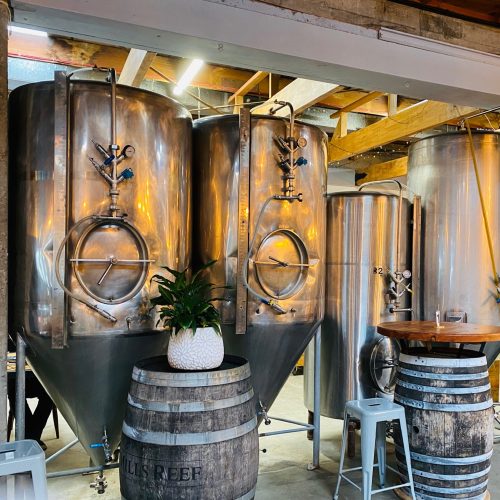 We jump back to the reason why Ron has such a deep interest in beer. Apparently young Ron sniffed and smelled everything in his surroundings, from his clean washing to his food, much to his mother’s exasperation. Mom even went so far as to advise her son that he was going to end up working in a perfume factory at the rate he was going. Ron smiles at the memory, and the idea, that he does indeed work in a perfume factory, the base just happens to be beer, and the advantage is that one can drink the end product!

Ron enjoys making full-bodied and full flavoured beer, a career in engineering R&D certainly helped with the required process and testing methodologies. The flavours in the beer come from the region, from local herbs and fruit, for example, a Black Doris Plum Beer that recently wowed enthusiasts. At one point someone dropped in some honey, thinking Ron might make some Meade; Ron scoffs at the idea, the honey was destined to much greater good, to make a beer, to be enjoyed by all.

Ron laughs as he talks about having mainstream factory beer “out the back”; some patrons still ask for it whilst seated in a craft brewery. “We try and convert them on to one of our easy-drinking beers, but the other stuff is there as a fallback, just in case,” he says.

From a patron’s perspective, one can order a beer flight, accompanied by food and a tutored tasting. Please don’t expect anything formal, Ron will provide you with the story of each individual beer, and what inspired him to make it. You’ll also hear the stories of his “cockups”, the many times he believed a brew was going to turn out in a particular way, only to be double-crossed by the brew itself. Mostly the result was far better than anticipated, other times… well, let’s not go there.

One can see that being a good host is principally important to Ron, he genuinely wants his patrons to have a good time, and he wants his staff to enjoy their work. His primary focus is the art of brewing craft beer, and beer in general. The bistro showcases local produce, beef from a local butcher, and most dry-goods and perishables from another family run business. Ron talks excitedly about the new head chef, currently in his first week, and the new menu in the works.

This is a family business, Carol, Ron’s partner runs around town sourcing ingredients and keeping the admin accurate, and son Dylan is getting more involved with the food side. However, everyone will drop what they’re doing to host guests.

Finishing off I ask Ron what he would like everyone to know about Taranaki, he is quick to say that Taranaki is undiscovered although quite cosmopolitan and that local artisan producers focus on production and service.

All in all, looking ahead, Ron is upbeat about New Zealand beer and food, and one can’t help leaving feeling the same way.

For further info, or to make a booking have a look at Mike’s Beer Website or Facebook Page