Whilst covering a foodie story we had the absolute pleasure of staying with Robyn and Paul O’Leary up Piko Road, outside of Urenui, Taranaki. What was going to be a break in a bush hut turned out to be so much more! 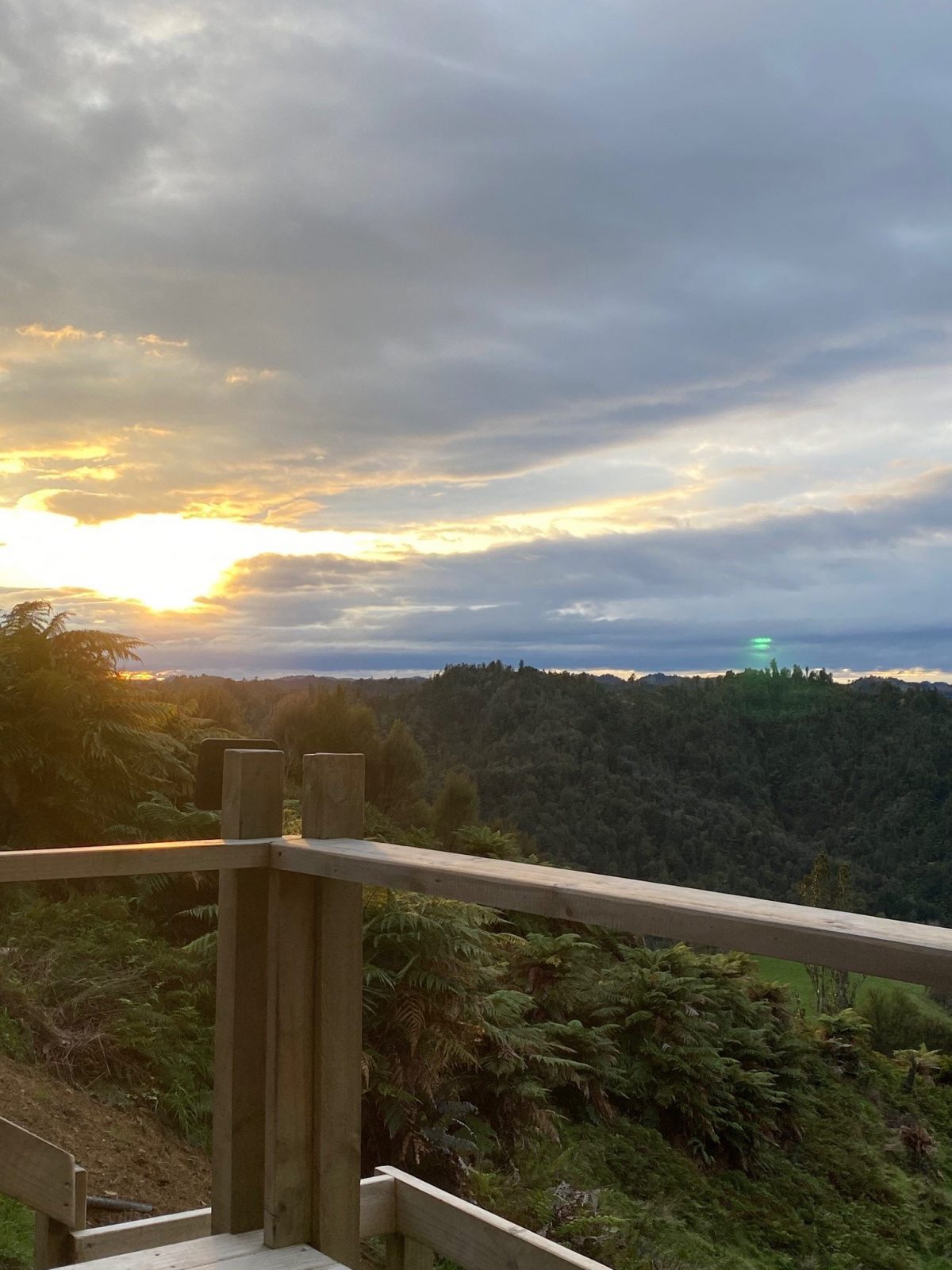 I really dislike my former self; I think I need to bring in some rules about undertaking things before one has actually seen the project. This time around it is Rewa Hut, in the heartland of Urenui, north of New Plymouth.

You see, I’m writing a regional foodie article about the deliciousness that one finds scattered through Taranaki, and for accommodation, I decided hubby and I should stay out of the CBD. Fortunately, Off the Beaten Track (OTBT) aims to connect Kiwis with Kiwis who own rural properties that are uniquely New Zealand. In chatting with Hannah from OTBT, she said we should try “the hut, Rewa Hut”, and upon her advice, we booked a couple of nights.

We ambled up the West Coast of the North Island on a grey and overcast day, typical of late June, arriving in New Plymouth for a number of appointments before we could book in and unpack. After a full day chatting to artisan producers, we were finally on our way up the valley, turning off SH3 onto Okoki Road and then a further 6.5km down Piko Road, arriving around 7.00 pm.

We were met by Robyn and Paul, the owners of Rewa Hut, along with in their farm dogs who provided a song of their ancestors and wagging tails to welcome weary travelers. It was time for our 4×4 transfer to the hut. We hopped in Paul’s Jimmy and we were off, a few twists and turns and there we were, what we could see in the dark was a large home perched up on a hill. Paul explained he had lit the fire and we should be toasty warm, there was tea and coffee, and milk in the fridge, and he left us too it.

Now bearing in mind I’ve said to the man, “We ‘re staying in a hut, up a valley, north of New Plymouth.”, one is inclined to conjure up rather basic and rustic accommodation. Oh, my word! This was absolutely the opposite, a large kitchen with a full fridge and stove, a pantry packed with everything one could think of, utensils, and kitchen paraphernalia which covered any requirement. Whilst I ooohed and aaahed over the kitchen, the man was inspecting the roaring fire, checking out the bathroom, flicking on the lights and establishing the lay of the land. A few prods and pokes of the bed and it was established that he could indeed “suffer” through a few nights of luxury.

It was dark, I’m talking about the dark that one encounters when light pollution ends, and you realise that nature rests deeply, however this did not deter hubby, he wandered out onto the expansive deck, trying to gauge the lay of the land, to no avail. When back inside, oh joy of joys, the binoculars were discovered, although of little use in the pitch black, they were tested. More fossicking about and he struck treasure, a compass, an old fashioned one at that, and ah yes, North was located. I sat on a comfy rocking chair sipping a delicious red whilst I watched an adult man indulge every boy’s dream of being in a hut, in the bush, with only a fire, binoculars, and a compass. (We shall simply gloss over the piping hot water, and electricity supplied by solar panels as well as the queen-sized bed fitted with a snuggly duck down mattress topper, the duvets, and expansive interior of an enviable cabin.) After much investigating, I was joined in another glass of red and we lounged back and chatted about life, enjoying one of those lovely evenings where time becomes irrelevant and there are no distractions.

A few logs on the fire later we decided we should get some sleep, neither of us had any problems drifting into slumberland almost immediately. For some reason I woke at 4.30 am, I wasn’t the only one awake and the two of us lay in the bed, looking out through the double glass doors at the perfectly clear sky, it was magnificent, the sky glowed and is an astronomer’s paradise. We crashed again and awoke to the realisation that we needed to get moving as Paul would be by in a few minutes to collect us. But wait! Look at that view, it was stunning! We were positioned at the top of the valley, looking across miles and miles of hills and cliffs. Rolling green paddocks, Manuka Bushes, and Ponga. After a quick shower, coffee in hand it was time to explore around the hut. Out of the kitchen, there is a dramatic drop into a valley covered by native bush, this can also be seen when working at the bench. To the right, a hill provides the highest point on the farm and a perfect lookout and spot for a picnic. To the left, beyond the gorgeous outdoor bath which we soaked in on our second night, is a smaller rise where I discovered the big kid inspecting the solar panels. 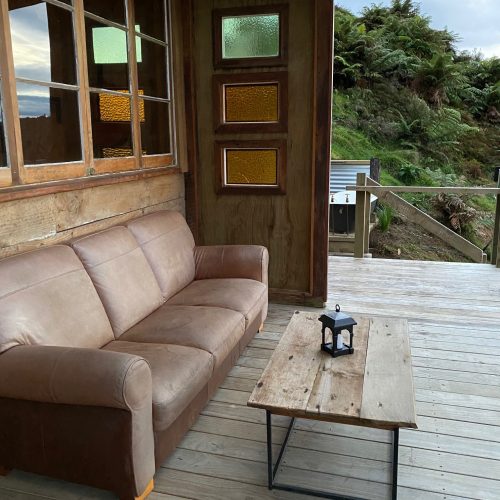 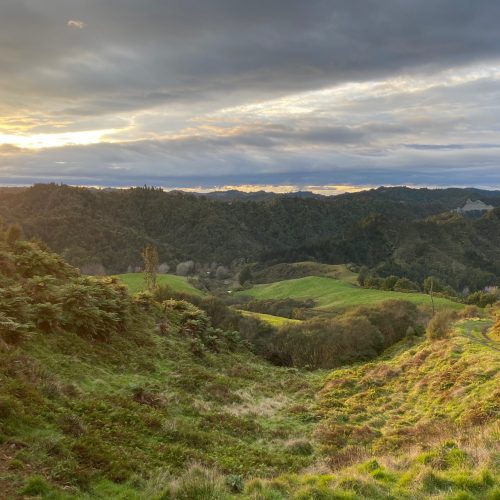 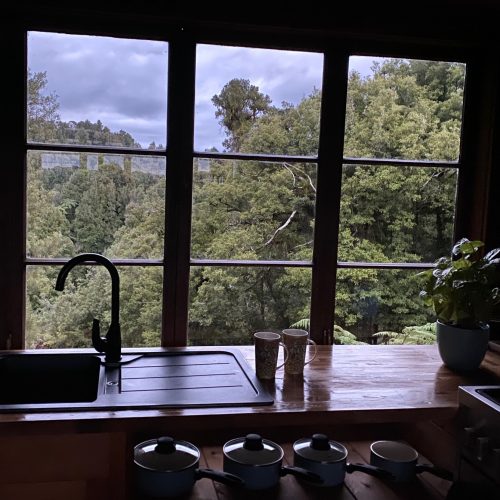 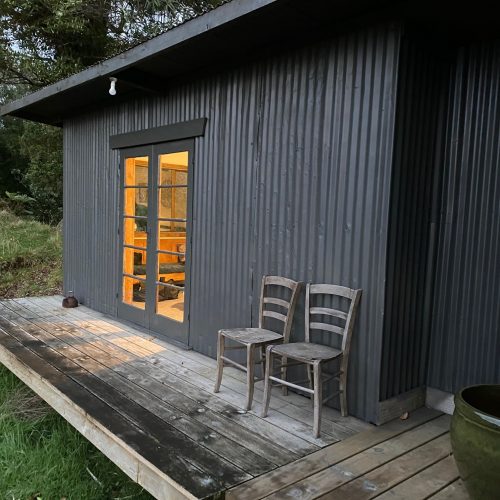 Paul arrived and we were cross questioned as to whether we had slept well, were we warm enough, was there anything else that could or should be done? All our answers were of resounding positivity that we were indeed in a wonderful state.
Robyn was waiting for us back at the homestead where the four of us settled in for a chat, over a cuppa in front of the fire, about the operation.
Residents of the valley for some twenty-two years, Robyn laughs as she explains that Paul has moved her further up the valley over time as they have bought and sold properties. Currently, they are running a small sustainable dairy farm milking 80 cows once a day on 162ha of mainly native bush and scrub land, they breed racehorses, and there is much excitement about a foal due late October. Over the years, the broader family has descended on the farm during the holidays, as a family ritual night walks to the highest point to look at the stars are always included.
Paul realised that the spot just below the lookout would be perfect for a hut. Initially, he built a shelter for a man, his guitar, and possibly a bottle of whiskey, affectionately it became known as Paul’s Hut where he would relocate to, to reconnect.

In 2018 Paul and Robyn’s daughter and son in law, Johanna and Blair, returned from Australia to help out on the farm. The kids moved into the farmhouse, so a bathroom, lounge, and kitchen were added to Paul’s hut to provide a fully functioning home. Robyn notes that all she hoped for was a place to cook and a basic washing area. However, the hut “grew arms and legs”, and with weekend help from Paul’s nephew what resulted far exceeded Robyn’s expectations. The couple lived there until May 2019. Covid lockdown in early 2020 saw son Dan, an engineer by trade, add on the splendid outdoor bath and fire area. Although Paul has lost his beloved hut, he speaks with pride of his son and the end product, Rewa Hut, is certainly wonderful.

Rewa Hut is a sanctuary, first launched in June 2019, a place to get away from it all and be one with nature. It accommodates two people and bookings are for a minimum of two nights with no pets, children, or hunting allowed. Visitors are encouraged to bring provisions, and as mentioned the well-equipped kitchen can handle almost anything you’d want to create. The owners have partnered with Off the Beaten Track and are targeting Kiwis, hoping they will get out and explore our wonderful country.

Two days later our time was up, not because we wanted to leave but rather the next lot of guests, who have discovered this gem, were coming in. Given the opportunity, we would have stayed far longer! I did have to explain to Paul and Robyn that they should check every nook and cranny as I feared they may have a 6ft stowaway, advising them that they should probably set a trap for a big kid that loved his stay in “the hut”.
With much laughter and huge hugs, we were on our way, feeling rested and relaxed having stayed in a hidden gem, with kiwi hospitality that was genuine and so far beyond anything one can ever access in a nondescript corporate accommodation option.

I am regretfully telling everyone about Rewa Hut, and why your next break should be there. It is the perfect spot for couples or some timeout for singles. … Although you can’t have Labour Weekend, guess who booked again?

his article was in no way sponsored by the owners of Rewa Hut.